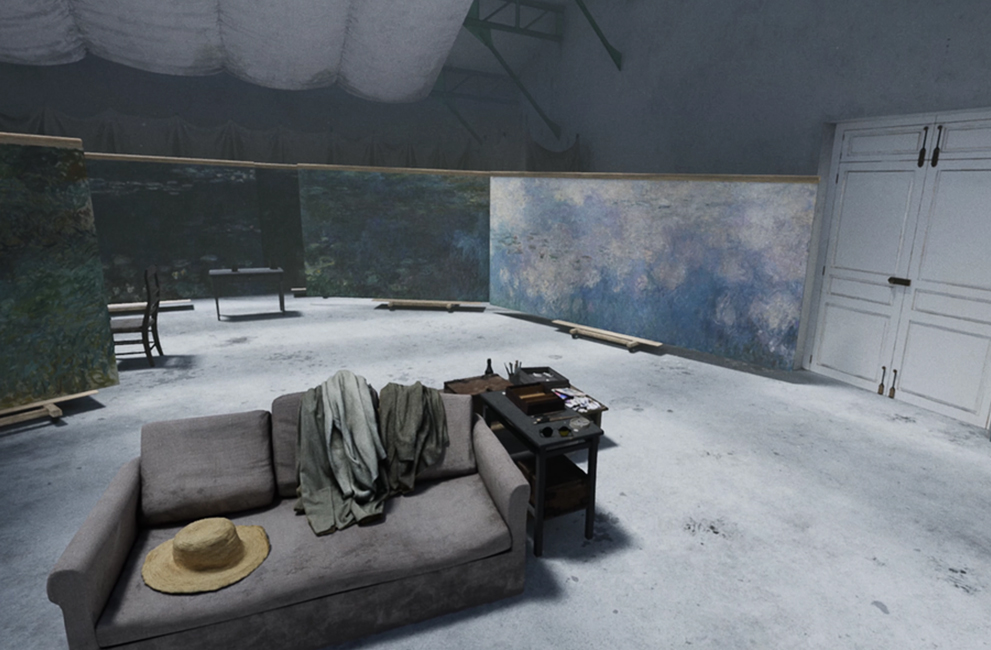 SMITHSONIAN | Step Into Monet’s world with a VR exhibition

Visiting the Musée de l’Orangerie’s “Water Lilies” rooms—an oblong pair of galleries fitted with eight panoramic panels from Claude Monet’s seminal series—is an immersive experience in and of itself. But as Flora Eveno reports for Belgian news outlet RTBF, individuals stopping by the Paris museum can now opt to literally immerse themselves in Monet’s masterpieces through a virtual reality tour of the French Impressionist’s world.

The VR experience, called “Claude Monet: The Water Lily obsession” transports visitors to the artist’s Giverny home and, most importantly, his garden. Monet spent the last 30-odd years of his life chronicling this landscape in more than 250 installments of the “Water Lilies” series, Mental Floss’ Kristy Puchko notes. The artist personally cultivated the diverse assortment of plant life scattered across the property, even importing his eponymous water lilies from Egypt and South America. (The move, incidentally, attracted the ire of local authorities who were less interested in Monet’s vision and more concerned that the foreign plants would poison the area’s water supply.)

According to a press release, the roughly 8-minute immersion traces Monet’s “Water Lilies” from inception to exhibition. “You stand in the shallow waters at Giverny, inspired as he was inspired by the dappled light and fickle seasons waxing and waning across the lilies and bulrushes,” the visceral statement notes. “You are then transported to Monet’s studio, where a virtual canvas is stretched taut above and around you and the artist’s bold, searing brushstrokes build up across your vision.”

“The Water Lily Obsession” debuted at the Musée de l’Orangerie this month, Blouin Artinfo reports, and will remain on view through March 11, 2019, as part of the museum’s ongoing exploration of Monet’s close relationship with French Prime Minister Georges Clemenceau. As Deborah Solomon wrote for the New York Times in 2016, the two were an unlikely pair: Monet was famously apolitical, never voting in an election, while Clemenceau, a consummate politician, had similar artistic fascinations as Monet, with Japanese tea bowls and woodblock prints adorning his apartment.

Clemenceau encouraged Monet to continue painting during the twilight years of his life, even serving as a go-between for the mercurial artist and the eye doctor tasked with repairing his troublesome cataracts.

On November 12, 1918, the day after the armistice ending World War I was signed, Monet repaid Clemenceau’s kindness by bequeathing the nation a group of his “Water Lilies” paintings, which he hoped would serve as a “monument to peace.”

“It’s not much, but it is the only way I have of taking part in the Victory,” Monet wrote in a letter to the prime minister “… I admire you and embrace you with all my heart.”

It took nearly a decade for that promise to come to fruition, Alan Riding notes in a separate New York Times article, but in 1927, the year after Monet’s death at age 86, his panels were installed in specially constructed rooms at the Musée de l’Orangerie.

Although the new experience is the Paris museum’s first foray into virtual reality, Monet’s work is no stranger to the medium. In 2017, VR artist Stephanie Riggs led the launch of “Monet in Giverny: The Later Years,” a colorful glimpse of the artist’s life as seen through the lens of his early 1920s painting, “The Artist’s House from the Rose Garden.” Writing for Medium, Riggs explains, “Only once the landscape and the artist’s point of view are established do the streaks of color appear, accompanied by Monet’s own thoughts. Stroke after stroke, the painting comes into being.”

“Claude Monet – The Water Lily obsession” produced by ARTE, Lucid Realities and Camera Lucida in conjunction with HTC Vive Arts, features a similar plunge into the process of creation. As ARTE notes on its website, the experience encapsulates Monet’s late-in-life embrace of abstraction and cacophonic color. It also mimics the worsening eyesight the artist experienced during the creation of his “Water Lilies” series, allowing participants to better understand the toll wrought by such loss.

Despite such bodily constraints, Monet managed to end his career with a burst of productivity most artists couldn’t hope to emulate over an entire lifetime—an accomplishment easily revealed by a stroll (virtual or physical) through the Musée de l’Orangerie.