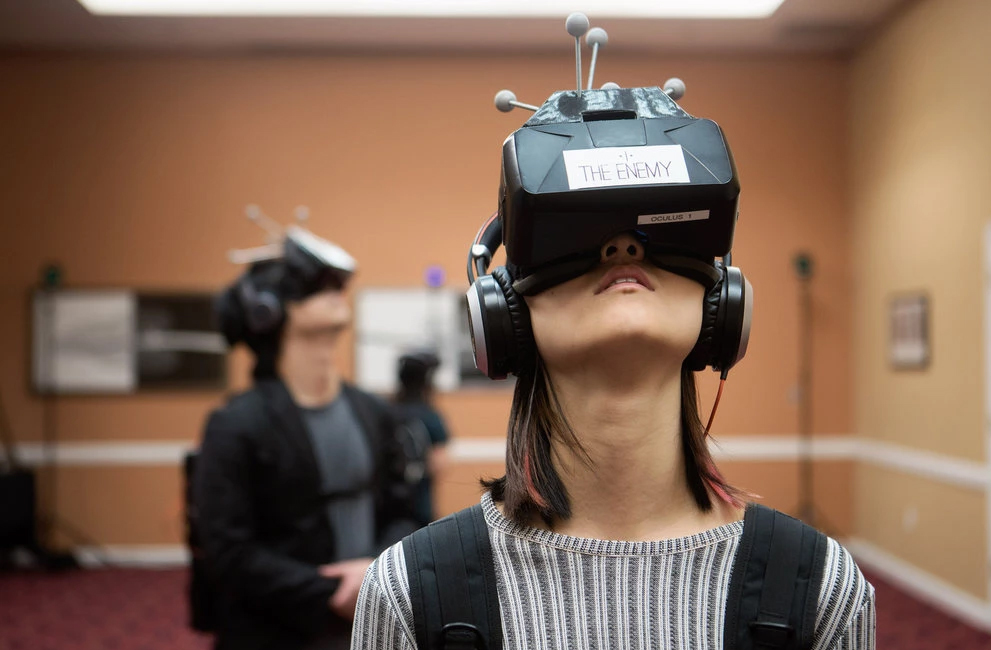 The New York Times | Meeting ‘the Other’ Face to Face

CAMBRIDGE, Mass. — Sitting in a conference room at a hotel near the Massachusetts Institute of Technology here, I slip on large headphones and an Oculus Rift virtual reality headset and wriggle into the straps of a backpack, weighed down with a computer and a battery. It feels as if I were getting ready for a spacewalk or a deep-sea dive.

CAMBRIDGE, Mass. — Sitting in a conference room at a hotel near the Massachusetts Institute of Technology here, I slip on large headphones and an Oculus Rift virtual reality headset and wriggle into the straps of a backpack, weighed down with a computer and a battery. It feels as if I were getting ready for a spacewalk or a deep-sea dive.

“The Enemy,” underway at M.I.T., is the result of a collaboration between Mr. Ben Khelifa and Fox Harrell, an associate professor of digital media.

The work grows out of more than half a century of collaborations between the world of art and the worlds of science and technology, spurred by pioneers like Experiments in Art and Technology, begun in 1967 by the Bell Labs engineers Billy Klüver and Fred Waldhauer and the artists Robert Rauschenberg and Robert Whitman. M.I.T. has been at the forefront of such cross-pollination, which has taken off at schools around the world in recent years.

In an interview before I experienced the virtual reality environment, Mr. Ben Khelifa, 44, said the idea emerged from a frustration that deepened over almost 20 years he spent as a photojournalist covering strife — often entrenched, interminable warfare — mostly in the Middle East. “Being a Tunisian growing up in Belgium, I think I always felt like I was wearing two different kinds of shoes,” he said. “In Iraq and Afghanistan, I could sometimes see things about fighters on both sides of the conflict that some other Europeans couldn’t.”

What he saw there was a culture of warfare that often perpetuated itself through misunderstanding and misinformation, with no mechanism for those of opposing sects or political forces to gain a sense of the enemy as a fellow human being. “I began to think, ‘I’m meeting the same people over and over again,’” he said. “I’m seeing people I knew as kids, and now they’re grown-up fighters, in power, fighting the same fight. And you start to think about your work in terms of: ‘Am I helping to change anything? Am I having any impact?’ ” He added: “I thought of myself as a war illustrator. I started calling myself that.”

Over the last two years, as a visiting artist at the university’s Center for Art, Science and Technology, he transformed what he initially conceived of as an unconventional photo and testimonial project involving fighters into a far more unconventional way of hearing and seeing his subjects, hoping to be able to engender a form of empathy beyond the reach of traditional documentary film. He interviewed Mr. Khaled in Gaza and Mr. Peled in Tel Aviv, asking them the same six questions — basic ones like “Who’s your enemy and why?”; “What is peace for you?”; “Have you ever killed one of your enemies?”; “Where do you see yourself in 20 years?”

Then he and a small crew captured three-dimensional scans of the men and photographed them from multiple angles. (He later repeated this process in the Democratic Republic of Congo. He is expanding the project to El Salvador, which is being decimated by gang violence.)

With help from several technology and digital media companies and funding from a collection of prominent foundations, he began to build avatars of his interviewees and ways for them to move and respond inside a virtual world so realistic it makes even a 3-D movie seem like an artifact from the distant past. Mr. Harrell describes it as “long-form journalism in a totally new form.”

“It should have a kind of lush imaginative vitality to it — a kind of lyricism,” he said of the effect that he and Mr. Ben Khelifa have been working to achieve, polishing the project with the help of test viewers since introducing it to mainstream audiences in 2015 at the Tribeca Film Festival. He added: “You have something here you don’t have in any other form of journalism: body language.”

And, indeed, inside the world they have made, the power comes from the feeling of listening to the interviewees speak (you hear Mr. Ben Khelifa’s disembodied voice asking the questions, and the men’s voices answer, overlaid by the voice of an interpreter) as your body viscerally senses a person standing a few feet away from you, his eyes following yours as he talks, his chest rising and falling as he breathes. I listened intently and immediately felt compelled, out of basic politeness, to remain in front of one interviewee until he had finished answering all of his questions before crossing the room to the other man. I could have sworn the 37 minutes that Mr. Ben Khelifa told me I had been inside the world, listening to the first two enemies and then to those from Congo, was no more than 15.

Sofia Ayala, an M.I.T. sophomore, tested the project after I did and emerged — as I did — with a mesmerized flush on her face, a feeling of meeting someone not really there. “It makes it feel so much more personal than just reading about these things online,” she said. “When someone’s right there talking to you, you want to listen.”

While Mr. Ben Khelifa hopes the project will eventually reach large audiences in the way documentary films do now, he said his target audience was “really the next generation of fighters from wherever we are.”

“In many places I’ve been, you’re given your enemy when you’re born,” he said. “You grow up with this ‘other’ always out there. The best we can hope is that the ‘other’ will now be able to come into the same room with you for a while, where you can listen to him, and see him face to face.”